All our songs that made the cut and finally ended up on our first album I Am Your Destiny are battle-worn and road-tested. They all have a great response when played on stage, which makes them a double-edged sword when it comes to recording; we trusted the compositions but it was also quite a challenge to meet and possibly exceed the expectations. Let’s have a look at how the recording went.

We have been dabbling in the wild magic that is the music recording for quite a while, but our first real experience with a pro studio was in 2016, when we gave it a try and recorded two tracks – The Metal Crusade and Inn of The Last Home – over one weekend in SoundYard. There was so much to understand from the recording and mixing standpoint, so we decided we would do most of the stuff ourselves next time to learn how to make music the hard way and bring our own hide on the market. This is the privilege of doing the first album. There won’t be a chance to screw it up next time.

Contrary to all that has been written so far, our first step was to hit a pro studio to record the drum kit. Because that’s the only thing that doesn’t even fit in a home studio.

Rumbling in the dungeon

During the stormy winter of 2017, we went to capture Roman’s savage artillery in the legendary Faust Records studio in Prague. It was our first time in a top-end studio and the experience was simply breathtaking. Racks and racks full of vintage equipment, a cozy control room with a huge mixing desk and a dungeon space for drum recording called “Hell”. How nice! 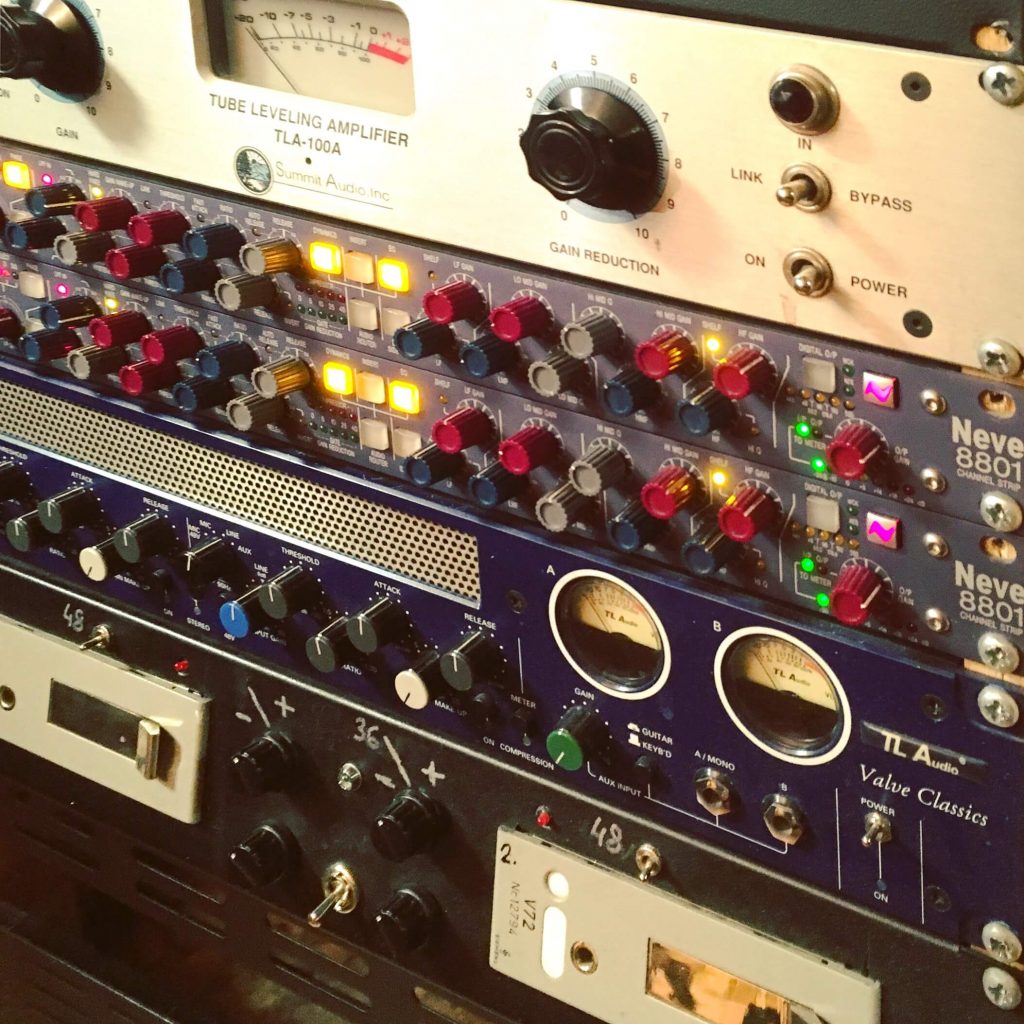 Our recording engineer was the fabulous Derek Saxenmeyer, so it’s no surprise that the sound came out stellar. He knew the studio inside out, was deadly professional and fun to work with at the same time. He and Roman spent the whole morning setting up all the microphones, squeezing everything from the kit. Some shells didn’t even make the cut, so we used the studio gear when necessary – we replaced the snare and added a huge floor tom to make some deep rumble. Once he got a decent monitor mix in his headphones, Roman was in his element and was nearly unstoppable. Finally sitting behind his kit and hearing it through some of the best mikes on the market, he was a pure manifestation of joy. It was still really demanding for him, because we didn’t rehearse for almost three months (with our rehearsal room recently razed to the ground). He was also chilled to the bone, because the dungeon was cold, it was way below zero outside (it might had been the first winter snow that year) and we didn’t really want to hear heaters on our recording. So, he put on his hoodie and often visited the rest of us upstairs to hear how the recording went. Next day, we fixed the low temperature problem with a bottle of Jameson. 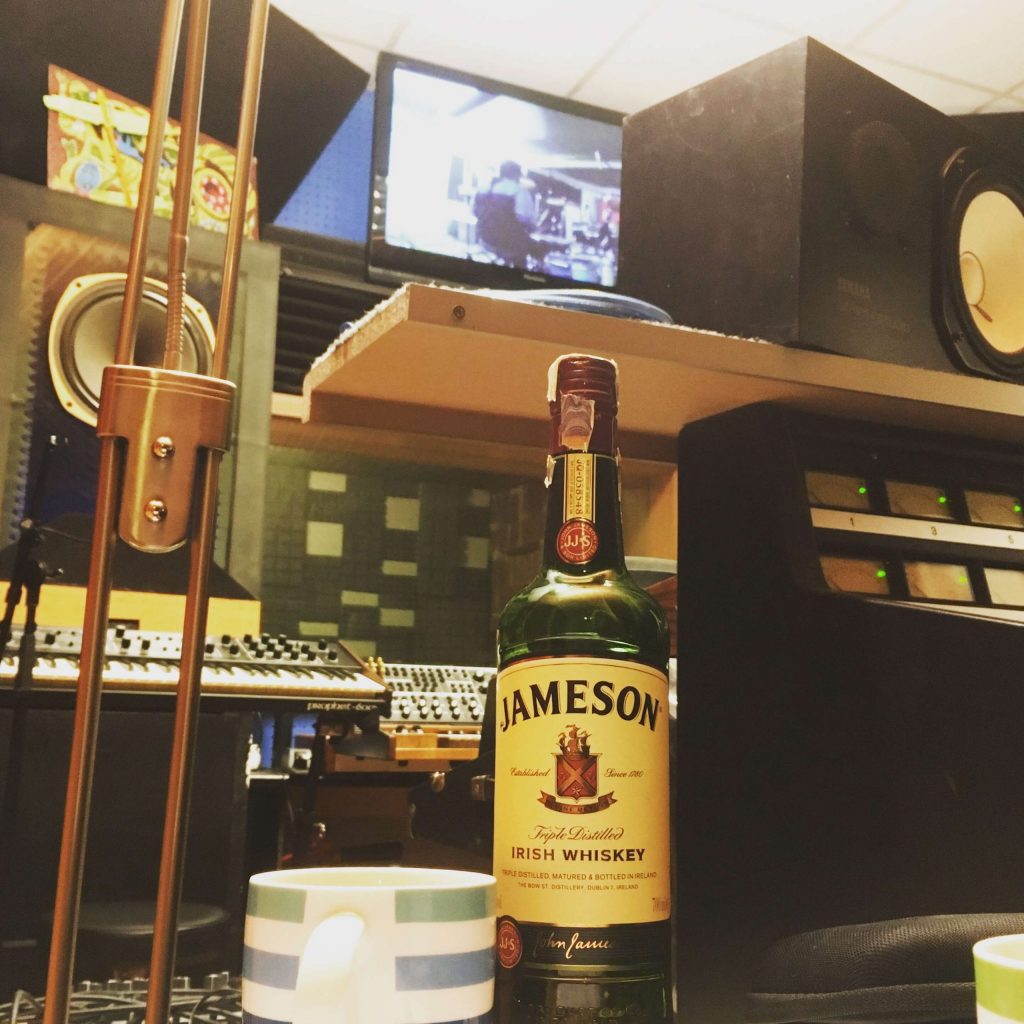 Davey was playing along with Roman the whole time from the comfort of the control room, though he had to play barefoot. For some reason his bass always makes buzz when he has his boots on. When we recorded the Metal Crusade single two years before, we tried everything; changing the cable, the amp, the cab, even the bass…the only thing that worked was changing the bass player, which was out of the question. Luckily, we didn’t have to record him in a free-falling plane as shown on Metalocalypse, his weird druidic feet just wanted to be directly connected to the studio wood floor. We knew what was going on this time, so Davey just made a sad face and did his trick again. Too bad the torture was unnecessary anyway; we re-recorded all the bass lines roughly half a year after – and then recorded every line again with a new killer bass in 2020. But damn, does it sound epic! The ESP is a totally different beast and Davey made huge progress with precision and dynamics between all these sessions. Definitely worth the effort.

After our studio weekend, there was nothing more to do to the drums other than editing the hell out of the takes made in Faust. The rest of the instruments benefited from the luxury of home recording and unlimited takes, so we were pushing the limits to make the tracks sound perfect. Sing better, play better, mix better, deliver what’s best in you – that was the motto of the day for several months in a row. 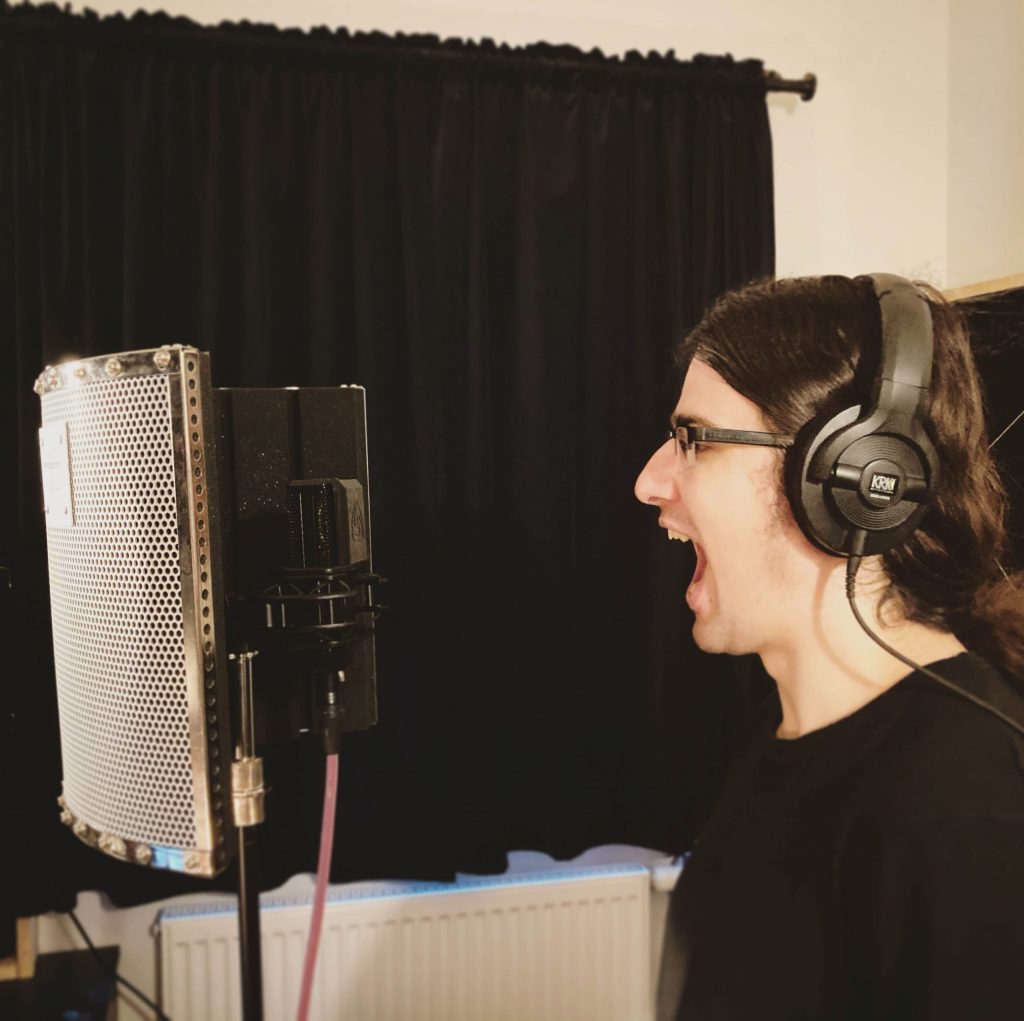 Trying new gear, new plugins, new tricks, buying better instruments and generally being obsessed with everything that might make a difference on the album. Hell, it was a remembrance ceremony all right, but you do have to make some sacrifices on the altar of heavy metal if you want to shred. As Marty’s 30th birthday was quickly approaching and his biological album release clocks were ticking faster and faster, we set up a deadline to November 2020, made some tough decisions, stopped all the tweaking and tinkering and started recording and mixing for real.

Feed it to the wolf

The coronavirus madness, lockdowns and stuff weren’t really beneficial for keeping our physical and mental health, yet they really helped with freeing up valuable time for recording and mixing. We were forced to work from home, we couldn’t do shows and, generally speaking, couldn’t do much else than sit on the chair and work our lower parts off. Also, pro artists were hanging out to dry far more than we were, so we exploited the situation and texted Charles Greywolf from Powerwolf. He had a small window to work on stem mastering for us before they went to record their next album themselves, so we had a deal and the mad race began. Most of the guitar tracks and vocals on the album were actually recorded in October along with the mixing right before to the deadline (which we missed, by the way). 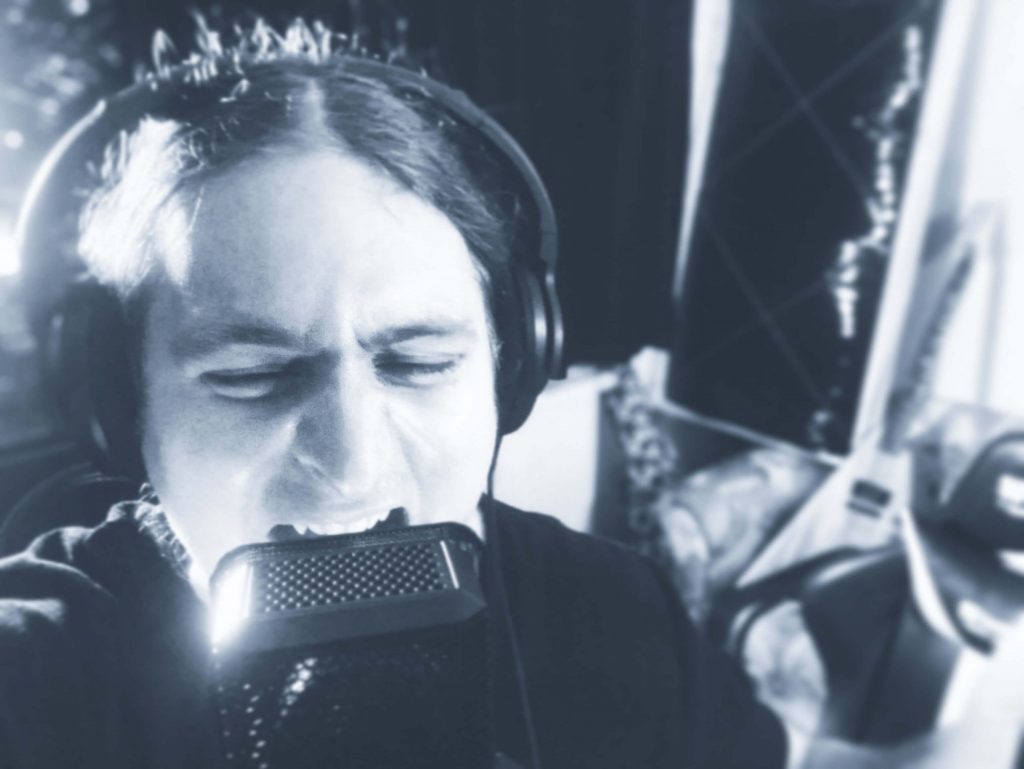 It was a tactical decision to choose stem mastering as the middle ground between full mix and just mastering, because we wanted to do much of the mixing ourselves, but also wanted to give Charles some freedom if the mix wasn’t stellar at the end of the production process. He did so much more than we asked for and we listened to the result in disbelief, humbled and grateful. 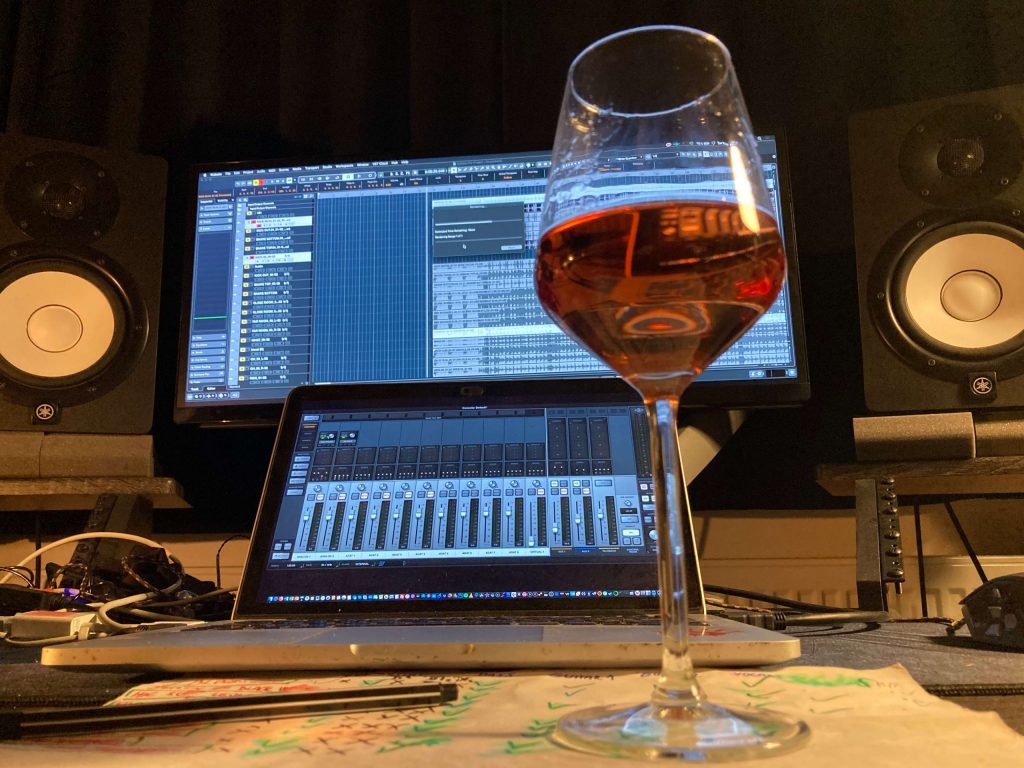 The album was then finally released on December 20, the plague was still roaming over Europe and we took a bit of time to finally catch a breath and start working on a new chapter in Falcar legacy. Another quest was coming.

Boring Cookie Pop-Up
Yes, we herd these nasty little creatures called cookies, too. Not only are they absolutely freaking necessary to provide you a brutal user experience, we also use them to collect anonymous data about what our beloved adventurers are doing on our website. Of course this online sanctuary has been built for your pleasure, so choose whichever option fits your character’s alignment.
Manage options Manage services Manage vendors Read more about these purposes
What are my options?
{title} {title} {title}